If you’ve been searching for a replacement box mod and have been struggling to find one that meets all your important needs, then maybe it’s time to consider something you haven’t tried before. Box mods are becoming the norm for vapers who want a little more power and better control of their vape, but in the past they have been complex and overwhelming. This has now all changed! In this Wismec Reuleaux RX200S Mod Review, I’ll manage to tell you the details what I discovered.

First off, the Wismec Reuleaux RX200S Mod is an upgrade to the already very popular RX200 with some subtle improvements including larger LED screen, improved interface and the ability to upgrade the firmware. Now let’s cover the design before we go any further. As a tech junkie and avid sci-fi fan, I really gravitate towards devices that have that slightly-odd futuristic look and feel – like the types of devices you used to see in those original Star Trek shows or the old John Byrne-drawn comic books from the Seventies and Eighties. With that noted, this device manages to meet that threshold when it comes to sleek, futuristic design.

The one I got to try was shapely, with a rounded box appearance that tapered ever so slightly as it rose to the top of the device. It was also two-toned, with the attractive outer geometric designs shared by all the best sci-fi props, and strategically placed buttons and screen. Put simply, this was not a device that I could imagine myself being at all reluctant to carry around with me in public. It’s absolutely gorgeous. Yes it’s a little on the large size in comparison the the V2 Trinity box mod, but it’s not too big!

After admiring it for a bit, I was informed that the hexagon-based shape wasn’t just there for giggles, but had actually been designed to accommodate the 18650 batteries that power the device. Ordinarily, I might have been disappointed that such a striking design was the result of function rather than conscious form, but the attractiveness of the unit quickly dispelled any of those feelings.

The display is an attractive OLED that provides details about power, battery usage, and temp control – as well as the coil settings that you’re using. The settings for the features are adjustable via the up/down control located below the OLED display. The battery area is accessed by removing the shell on the outer surface of the device. One thing to remember, though: the device itself doesn’t actually come with any batteries, so keep that in mind when you buy yours. To power the Reuleaux RX200S, you need three (yes, count them: three) 18650 batteries.

I was vaping the Joyetech eGo One Mega V2 and although I love that vape pen, the RX200S features and controls are just awesome! 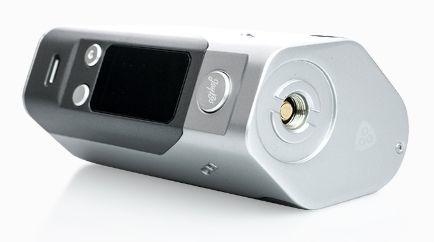 The device offers wattage ranges between 1 and 200 watts, and allows you to customize your temperature settings to achieve temps ranging from 100-300 degrees Celsius. It also offers Stainless Steel threading, a magnetic back cover, and several ventilation holes. Its 510 thread makes it compatible with many of the most popular RDAs and tanks on the market today, so it should fit nicely with the rest of your collection when you bring it home.

After playing with this thing in the shop, I just had to buy one and take it home to give it a really good test run. The first thing to know is that those three batteries that you have to use to keep this device running properly have one major benefit that you won’t find with many mods these days: longevity. With casual to moderate vaping, you can easily get anywhere from two to four days’ worth of power before you need to recharge. Now, I’m not sure why you would ever actually need to go that long without a charge (unless you were maybe lost in the woods or trapped in a mountain cave), but it never hurts to have that sort of peace of mind. It is definetely a contender for one of the best e cig mods out there right now!

The power is consistent too, with none of the weird irregularities that some custom mods sometimes create. And when you use it, you’ll probably discover what I figured out almost immediately: this is one of the most ergonomically pleasing designs on the market today.

The device can be found in four basic color schemes. There’s a black model with cyan accents, a black with blue accents, black with red accents, a black and white version for those who want to avoid the more retro look of that high-tech design. The mod itself sells at around $48.95, without batteries. That means that it’s definitely not the cheapest device out there, but who really wants cheap when you can have quality?

In the final analysis, let’s end this Reuleaux RX200S review with a simple declaration of support. I enjoyed this product enough that I’m recommending it to everyone who wants to experience the benefits that a truly great mod can bring.

The Importance of Vaping Accessories That You Can’t Live Without