When evaluating any vaping products, the reputation of the company really does matter. Companies with sterling reputations for quality and attention to detail tend to invariably churn out quality products time after time. Rarely is there a break from that pattern of success. Vapor4Life is one of those companies that has spent some time now developing a reputation for superior quality, so reviewers tend to begin any assessment with an understanding that the product is likely to be a good one. In this Vapor4Life Vapor Zeus Review, we’ll see if that type of assumption stands up to reality. Just how good are these products and can they compete as one of the best Cig-a-like e-cigarettes on the market? Let’s see…

V4L is a family enterprise that produces electronic cigarettes, cartomizers, and a great selection of different e-juice options. They’ve consistently received positive marks for their commitment to producing great taste sensations and the vaping devices needed to bring them to life. In recent times, the company has been hard at work to bring that upper echelon of vaping efficiency to the vaporizer market, so that beginning and intermediate users can enjoy the same level of performance that expert users get – but without having to deal with all of the hassles that come from using the most advanced mods and customization features.

Reviewing the Vapor Zeus: The Order

The Vapor Zeus is, above all else, a class act. You can just feel that class as soon as you open the package and take a look at how everything is put together. The product arrives in a quality box with attractive labeling, and everything that you need to get started with your Zeus experience. The contents can vary, of course, depending upon which kit options you ordered. That’s one of the great things about V4L: the company offers the type of flexible and customizable ordering that few of its rivals could ever hope to match. We reviewed the version of the device, which is an automatic unit. You can expect most kits to come with the 1200 mAh battery, the company’s own “smileomizers”, charging cable and adapter, and e-liquid. 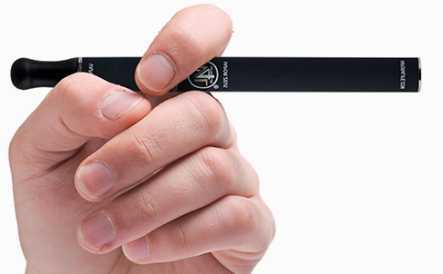 So, what’s the Zeus look like? Well, it’s big. Unlike many other vaping devices these days that are trending ever-smaller, and seeking to either mimic the size of a cigarette or opt for something even smaller like the Green Smoke e-cig, the Zeus goes big. Just like its namesake. It’s about the size of a really great cigar, and has just enough weight to it to let you know that it’s not your typical e-cig. It also comes with a straightforward design that is built to last.

This is one of those two-piece devices composed of the battery and the aforementioned-smileomizer. For the record, the smileomizer is a customized cartomizer unit that is capable of holding as much as 6 ml of your favorite e-juice. You get two of these cartridges with your kit. If you’ve ever used one of those rechargeable atomizers that has the disposable cartridges, then you should have a pretty good idea about how this assembly works. With the smileomizer, you get a nice silicone tip to draw one – and you can actually bite down on it in the same way that you would with a cigar.

It’s also worth noting that the device has the USB port at the bottom of the battery – and it has pass-through vaping capabilities. More companies are making products with this option these days, and we’re deeply grateful. The pass-through feature enables you to charge the device while you’re using it, which can be an important feature if you’re in some office job where you may not always want to focus on how long your battery is going to last.

Performance of the Vapor Zeus 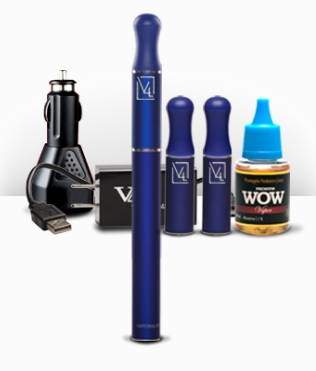 If you love all that, then you’ll love the performance even more. Battery life is not really an issue, in spite of the fact that the kit comes with only one battery. With that pass-through capability, there’s never really an excuse for you to run out of battery power anyway. If, however, you are even caught in the woods with no available recharge ability, the 1300 mAh battery will provide you more than a day’s worth of power to find your way back to civilization. That’s more than enough longevity for most average users.

The device is completely responsive too. You don’t have to work too hard to get vapor out of it, since any minor draw activates it and causes plumes of vapor to be released. This is not one of those soul-sucking devices that has you turning blue just trying to get a wisp of vapor. This is designed to create the vapor you need almost effortlessly. That’s a major step forward in terms of automatic vapor production, and the company deserves to be applauded for its innovation.

Better yet, the device produces consistent vapor even at different battery charge levels. You know how so many batteries give you weaker draws as the power source depletes? Well, V4L seems to have overcome this problem with a device that delivers consistent vapor production at all points of the battery charge life cycle. That’s a major plus as well. On the negative side of the equation, though, there is no warning light to let you know when the battery is dying and in need of a recharge. That’s a weakness that should be addressed in future updates, but for now we can take comfort in the knowledge that we have pass-through to help avoid dead batteries altogether.

The Vapor Zeus: Our Conclusions

What’s in a name? Well, if your maker calls you “Zeus” then one would hope that there’s quite a bit there. Zeus was, after all, the king of the Greek pantheon of gods. He was the bringer of lightning, the conqueror of titans, and the father of all. When you give your electronic cigarette the name Zeus, you’d better be prepared to bring the lightning as well. Your product needs to be strong, reliable, and capable of moving mountains. That’s a major challenge, to be sure. However, after reviewing the Zeus, we can confidently say that it meets that challenge and is definitely one of the best e-cigs on the market in it’s class.

Tips On How to Build an RDA Coil: A Beginner’s Guide