Well, Vapor2 (or V2 cigs as they are also known as) doesn’t really need any introduction if you’re a regular vaper with any experience in the industry. Suffice it to say that Vapor 2 is one of those companies that never fail to put out powerful vaping devices that are always on the cutting-edge of the latest technological innovation, they have one of the best vape pens on the market known as the V2 Pro Series 3, and only a few months ago released the V2 Vertx and XEO Void. One of their latest offerings is a little something called the trinity box mod – a powerful vaporizer that was rumored to be capable of putting out some serious cloud action. Of course, when we hear claims like that, we consider it a challenge that needs to be tested in every way possible. Challenge accepted. In this Vapor2 Trinity Box mod review, we’ll give this product the test of its young life and see whether V2 deserves to keep its reputation for quality and performance.

First of all, let’s begin with a note about availability. We found the device on the company’s website – sold in kit form. That came with the mod, tank, atomizers (one was a .8 ohm sub-ohm unit), manual, and USB charging rig – all for a price under $90. Not bad at all. There was no e-liquid offered with the kit, but that’s typically for the best, since we usually just test these products with our preferred juices anyway. Hey, don’t judge! There’s no rule that says that we shouldn’t be able to enjoy ourselves, right?

Anyway, the device was more attractive than we expected. Both the black and the blue versions of the mod come with a great little OLED screen to check battery usage and other features – and a gorgeously sleek exterior that makes it all look very high-tech. The micro-USB port is right on the face of the device too, which makes it easy to locate. Oh, yeah – those other features that you can check with your OLED screen include things like wattage, resistance, and voltage. In other words, that works. 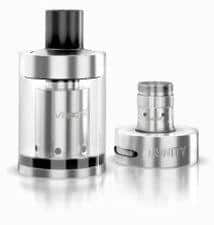 The liquid tank is top-fill, which is what you would expect from a company that tends to strive to keep up with the latest trends. Personally, I wish everyone would go top-fill on these devices wherever possible. It’s so much easier and cleaner – and some of us aren’t quite as steady-handed as we were in our younger years. In any event, the tank holds 2ml of your favorite juice, which is more than enough for most vapers to enjoy a serious bout of vaping.

Now, here’s where thing get interesting for us. Unlike some devices that get prickly when you’re using certain types of e-liquid, this little marvel was designed to accommodate a variety of PG and VG options. That’s great for people like me who always seem to have dozens of different juices on hand to fit my ever-shifting moods. If you don’t have a preference yet, you could always start by searching the V2 site. I don’t keep any of them on hand right now, but they do have a nice and eclectic assortment of liquids from which to choose.

A word about those juices, though. There are two atomizers with different resistances included with the kit. Make sure that you reserve the lower-resistance device for your VG liquids, to ensure that you get maximum cloud production when you vape. And if that particular resistance is still too high for you, you might want to consider the 0.5-ohm option that can be purchased on the site.

As far as capabilities go, we were a little under whelmed by the wattage capacity. The device only produces about 40 watts of power, and we were hoping that this latest model would be designed to dazzle us just a little more. 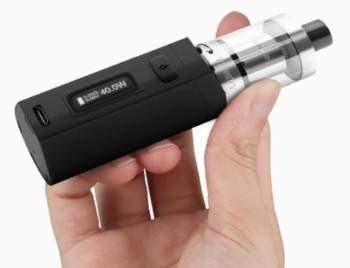 With that said, however, there is variability to the wattage, which makes for some nice personalization features. A little more power would have been nice, however.

The flavor and vapor production were still outstanding making it one of the best box mods, especially for its size. We got thick clouds of vapor on a continuous basis, and my VG juice managed to maintain its flavor better than I anticipated. Yes, I know that we were a little dissatisfied with the 40W rating, but that didn’t stop me from spending about an hour more with this device than I had originally planned. Again, nice flavor and vapor production – obviously enough to maintain my interest over time. The battery life is estimated to be about 450 draws worth of vaping, which is pretty impressive for something this size. Even after several hours of use, my battery was still charged quite nicely.