Vapor4Life have long been a player in some of the best e cig products on the market. They recently introduced their e-liquid lineup with the name Ultimo Vapor.  Vapor4Life (V4L) has a long history in the electronic cigarette industry producing their own products like the Vapor4Life Zeus or even marketing the bigger brands in the industry like the Joyetech eGo One Mega V2, there were once one of the most respected brands around. In recent years, they’ve tended to receive less notice than a number of other companies, but not because of any real drop-off in what they do. The market has just become even more competitive than it used to be, and it’s sometimes difficult to single out any one company and declare that it has the best products, prices, and support – three things that V4L was always known for. Of course, there’s something else that the company used to be known for, and they’ve apparently continued to hold fast to that specialty: e-liquids. For years, V4L maintained one of the most impressive an some argue the best e-juice lineups in the world, with more than 100 unique flavor recipes that ranged from the standby tobacco flavors that used to be so popular in the company’s e-cig lookalikes to more exotic tastes like fruit, coffee, and other sweet treats. Well, Vapor4Life has a new set of flavors out there: The Ultimo line. In this Ultimo Vapor E-Liquid Review, we’ll consider whether the company still has that magic flavor touch as examine this new line and see how it stacks up to expectations.

There are more than a dozen flavors in the Ultimo Line, so this review won’t be able to cover all of them. We will cover some of the more popular ones, though, so that you can get a better idea of the general tone and tenor of the product line.

Bali Paradise was perhaps our favorite of the fruity-tasting blends. If you like those little tropical drinks you can get when you’re on vacation in the Caribbean or other exotic locales, then this will be right up your alley. It’s an exciting blend of pineapple and mango (mango seems to be among the more popular e-juice flavor options these days, doesn’t it?) that is given life and substance by the addition of cream. We found that it vaped beautifully, producing just the right amount of vapor and a burst of intense flavor that had us licking our lips with satisfaction. We think you will too! 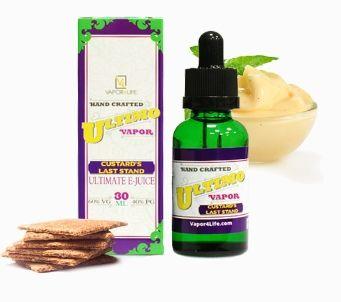 With a name like that, you know that creaminess is lurking somewhere in the recipe. Well, this has a powerful vanilla custard aspect to it that incorporates that honey flavor that so many custards used to rely on decades ago. Taste-wise, it’s hard to beat. In fact, this might be one of the most flavorful custard renditions I’ve run across in quite some time!

Berry Berry Good to Me

Look, the name alone should have told you that we just had to try this juice. I love clever names, but it’s safe to say that I love clever tastes even more – and this juice has that in spades. As you might have guessed, this is a blend of several different berries. Blueberry, blackberry, raspberry, and strawberry combine to create a perfectly balanced mixture that offers nearly-equal parts tartness and sweetness. If you like fruity blends, it’s difficult to find one with more taste sensations.

Every great product line must have a menthol flavor in it, or I end up tempted to just write the whole line off as incomplete. Well, Ultimo doesn’t disappoint on that front either, as its Arctic Tobacco product is a chilly menthol-flavored burst of joy. Great menthol always gives you a perfect blend of minty taste and coolness, and that’s true with Arctic Tobacco too. If you’re a fan of menthol, this juice is for you!

Before we go, I just had to include a few words about Barista’s blend. Back when I was a smoker, one of the simplest pleasures each morning was starting my day with a smoke and coffee. Barista’s blend hearkens back to that time with a taste that offers both flavors in a satisfying blend of wake-you-up goodness.

As a final note, each of these juices arrives in a 60/40 VG/PG ratio, which is a great way to get a little more vapor out of each draw as long as it’s used with the best e cig of course. While some have complained about the high PG content and suggested that it lends a noticeable aftertaste to these juices, we disagree. With normal usage, these flavors are about as pure as you can find anywhere.