Well, if you’re one of those people who is easily lured away by the prospect of an even better e-juice than the one you’re currently using, hang onto your hat. After you read this ruthless e-juice review, chances are that you’ll be tempted to run out and try one of their great selections right away!

The ruthless line of product offerings has something for just about everyone. They have creamy flavors that offer more than just those traditional tobacco offerings. You get the fruitiest and most exotic tastes to thrill your palate and entice you into another world, if you vape this with the best e cig then you are apparently in heaven!. But let’s skip the hype and get right down to it, shall we? Here we go:

Firstly, let’s look at Banana Chips. It’s got a great 60-40 blend of VG to PG, so you know you’re going to get some great vapor production to go along with that rich banana flavor. Now, if you never thought that banana would make for a great vaping experience, think again. In fact, this one was actually one of my personal favorites from the line – but then again, I’m also a huge fan of banana cream pie so I may be just a bit biased in my assessment.

Grape Drank is even more vapor-prone, thanks to being 85% VG in its base composition. We’re talking clouds of vapor here. Meanwhile, the taste is reminiscent of grape soda – not that new and weakened grape soda that they seem to produce these days, but that good, old-time soda shop grape soda that some of us older vapers enjoyed as kids. Wow!

Select Jungle Fever ups the ante even more with a 90% VG base that is ridiculous when it comes to the size of the clouds it produces. It also offers a great fruity blend that incorporates pineapples, mango, and citrus for a pure fruit sensation.

Swamp Thang is another 85% VG offering that takes an apple approach to the taste. In this case, thought, it’s more of an apple hard candy taste, which means that it has a bit of a sour twang to it as well. It’s sour enough to make your lips purse in that familiar puckering motion that you might have when sucking on sour candy. 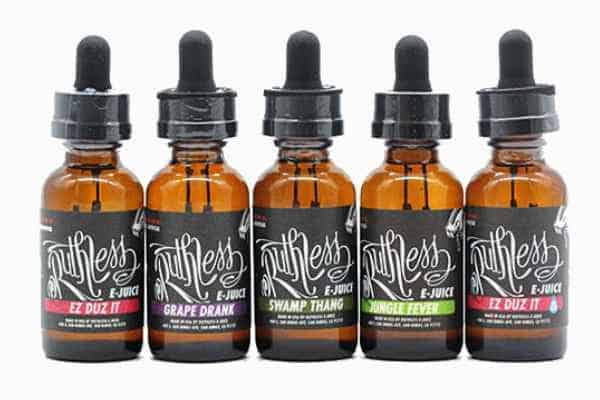 Peach Fuzz comes at you with the 85% ratio of VG too, along with a nice peach flavor that reminded me of some of those fuzzy peach alcohol drinks we used to try at bars back in the day. It’s just peachy enough to discern the fruit taste, but not so overpowering that it makes you want to run in terror.

CREAM Sicle is a similar blend that provides the creamiest flavor and vapor sensation I’ve experienced in some time. It’s an orange and tangerine blend, so expect plenty of taste, but without much of that bite that you might get were the whole recipe not balanced out by the creaminess. It’s delicious, and sure to be one of your favorites if you give it a try.

Mandango offers just what you’re looking for if Mango is your thing. It’s got that powerful mango taste, while Slurricane is another 90% VG blend that offers a mix of guava, papaya, and peach. It’s a remarkable comforting taste sensation that I could easily make my daily vape choice.

Rise has mango too, mixed with lychee and jack fruit – and it was created for a cause. The company launched the flavor to help Filipinos who suffered during a typhoon, so it was designed to be an uplifting and hopeful flavor that would remind users that there are still good things in the world to enjoy every day.

Chewbacco should be mentioned as well, since it is the only tobacco sensation in their line. Now, if you were expecting a straight tobacco flavor from a company devoted to all things fruity, guess again. In this case, the tobacco flavor is mixed with a delicious chocolate taste. And I do mean delicious!